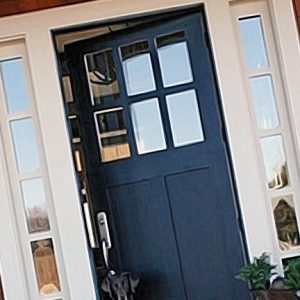 Let me set the scene for you. My property has a big front yard where my children and dog play every chance they get. I have a twelve-year-old daughter and ten-year-old son who both love footy and are developing their skills in their respective teams. When they’re not developing their skills on the oval, they’re having a muck around together with the footy in the front yard. The problem is, bordering both sides of our front door are rectangle glass windows, with the middle windows acting as a feature-style mosaic for decoration.

We have a rule that any kick of the footy must be away from the window. The kicker kicks it towards the fence where the other child is waiting ready for the mark. This rule worked well for about three months, before the ball started getting kicked over the fence. It started happening more and more often, and each time the kids would come in to ask me to grab the ball. The good kids knew not to go on the road, and it was something I was happy to do.

Now this is when the incident occurred. It was the fourth time that the ball had gone over the fence, and my bubbling frustration made me kick the ball back over the fence with the idea that it would land on the grass. I over-kicked. The glass in the left panel shattered instantly. Thank goodness my kids weren’t near it. We needed a glass replacement quickly. Not only was it a danger to my kids and I, it had also left a gaping hole next to the front door where the glass used to be. It would’ve been a lot easier if I had just cracked the glass, not completely shattered it. Melbourne weather is so bad that it feels like a gale force wind is coming straight through the gap down the hallway. We definitely couldn’t put up with that for much longer than a few hours. Luckily we got it replaced pretty quickly. The wife wouldn’t even have known if I hadn’t told her.

I actually spoke to the man who suggested that we would benefit from a stair balustrade. Maybe I’ll save up and invest. Could look cool in the house.