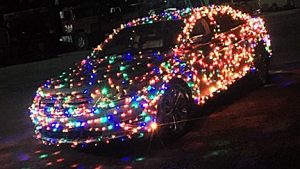 All I wanted was to spread some holiday cheer. If I’d known it was going to hit my wallet so hard, I wouldn’t have done it. Bringing jolliness to children is worth a lot to me, but man, not that much. There’s a lot of costs, it turns out, to running a Christmas-mobile. The tinsel covering my number plate earned me a fine of a few hundred dollars. Speeding and red-light fines because I couldn’t see the speedometer or front window (how is it my fault that the baubles got in the way?), and that’s all without mentioning the tyre repair. Toowoomba is not the worst place to have a tyre burst, but I can think of a dozen other places that would be more convenient.

The children loved my car, with the robot reindeer prancing on the roof and Christmas tunes blaring out the windows like it was some sort of ice cream truck. But really, this was a bit of a waste of time and money. Next year I think I’ll stick with the light displays like everyone else.

Speaking of lights, people aren’t too happy about the several-kilometre-long line of them I left between here and Highfields. I thought it would be a fun trail toward the Christmas-mobile, but apparently it was just dangerous. Now I’ve got to find a good auto mechanic who will take off the lights dispenser and all the other stuff I put onto the vehicle.

You try to do something good for the world and the children, but end up almost having to declare bankruptcy. There’s something wrong with this world, I’m telling you. I’d better cancel my plans for the Christmas-chopper because I have a feeling that people won’t like that either. You’d think I would have learned after the Christmas-train went south, literally. The Christmas submarine was useless because nobody saw that one coming. So I think a simple Christmas display will be best for next year. If that’s what people want, it’s what I’ll give them.