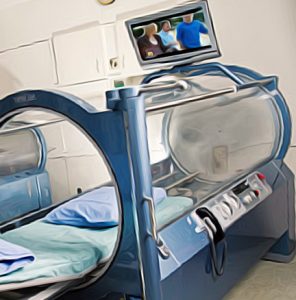 I don’t like to be disturbed while in my hyperbaric chamber. It’s a time for me to come up with vile plans to take over the city of Melbourne, as all good evil scientists do. I bought my hyperbaric chamber recently, after rewatching Space Battles: The Bad Guys Attack Again. I got up to that scene where Dark Invader is in his special health chamber and thought, ‘Boy, he looks very menacing in there.’ So the next day I started planning for my own health chamber. Whenever I get bothered while relaxing there, I get pretty mad. This morning a postman came and rang the doorbell to my castle while I was having my morning hyperbaric session, so I made sure he regretted it. When I opened my front door, I blasted him with a freeze ray.

There are plenty of portable hyperbaric chambers around Melbourne, but I like having my own personal one. It’s the best investment I’ve made in years. Even better than the castle that overlooks the city I wish to control one day. I’ve come up with so many evil plans that I can no longer label them from A to Y in my filing cabinet. Just this morning, before the postman interrupted me, I had the brilliant idea to send spam emails to the Premier of Victoria. After several weeks of receiving them, he will beg me to stop and hand over the key to the city. All right, it may not be the most elaborate plan, but sometimes the simple ideas work best.

After all, just look at the greatest supervillains to have graduated from the STA. Hammerhead took over New York by turning all hammers into mashed potatoes. Everyone got so frustrated that they swore to serve him just so that they’d get their hammers back. And then there’s Roo Dock, who has taken over a large part of the world through a seemingly normal business in the media and entertainment industry. You don’t have to build giant robots to get what you want, even if it is pretty fun.