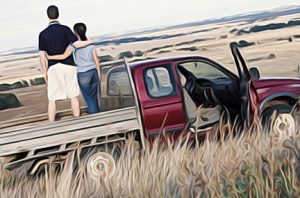 Honest question: if you had the opportunity to take off in a 4WD to live in a run-down shack in some remote town with a name like Hell Creek or Borisville (population: 30), would you consider it? You would, wouldn’t you, if only for a second? I’m just here to remind you that you do have that option, assuming you have a 4WD in good working order… which some of you don’t, I guess. I forget that sometimes.

I am being serious, though – no disrespect whatsoever meant to the residents of Blue Creek or Borisville, if those are in fact real places. I think most of you city slickers could use a break from the big smoke (even from the small smoke) to deal with nothing more pressing than our immediate survival. It might sound like I’m overly romanticising the experience of living in the sticks, but I’m not saying that that lifestyle is free of stress. I’m just saying it’s a different type of stress.

Of course, there’s more to it than sitting around thinking about ute trays to buy. Melbourne dwellers might not realise this, but you can’t just drive half an hour down the road to a custom aluminium fabricator when you live in Borisville. Try a three hour drive, and then you might be getting somewhere, if you’re lucky. That’s not to say you can’t spend some of your time weighing up your shortlist of perfect 4×4 aluminium canopies; there’s plenty of time for that. But you’re going to have to plan for survival in a completely different way than you would in the city.

As you may be starting to see, there are troubles aplenty with living in these locations, but at least you’re not going to be distracted from what’s important by going out to buy things you don’t need every day of the week. If you’re going out, you’re damn well going to do multiple essential errands – end of story. And there’s a certain charm to that; am I wrong?