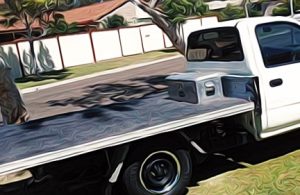 If Christopher thinks he can just rock up out of the blue and ask me for mates’ rates on ute fittings… well, he’s dreaming. Sure, we used to be pretty tight but we haven’t talked in over a year, ever since that incident with the demerit points. He still reckons that the speed camera came out of nowhere, which means he’s not responsible for the situation, whereas I maintain the simple fact that he owes me three demerit points. Or, you know, the equivalent thereof. He should be buying me a new toolbox.

Also, what’s all this nonsense about a cake cart? How in the blazes is a ute toolbox going to help with that? Does he think he might need a range of spanners to cut into a schwarzwälder kirschtorte? Or perhaps some cable cutters to unclog the milk frother on the espresso machine. He’s dreaming, I’m telling you.

Here’s the thing about undertray toolboxes for utes. You buy a good quality one, and it’ll last you a lifetime, unless you change up your toolkit or something, in which case you can sell it for what it’s worth. It’s not the kind of thing you palm off to your cousin in exchange for a 6-pack, unless you’re really good mates. I’d be lying if I said I didn’t give a toss about Christopher; it’s not like I’ve disowned him as my cousin or anything. But he’s not a trustworthy kid, and I’m not going to just up and forgive him until he gives me a sincere apology.

Cakes, man. I don’t know. Maybe he’s onto something. But he should be looking at aluminium ute canopies to buy. Melbourne loves its coffee and cake, that’s for sure, but he needs the right kind of rig to serve it in. Honestly, I don’t Christopher’s design is going to work, and I could help him improve it. All he has to do is say the magic works, but I’m not holding my breath waiting for that to happen, so he’s on his own for the time being.