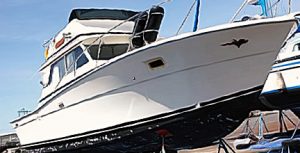 I think I would like to work with boats. I’ve been considering a career change lately, as I’m not exactly happy waiting tables and dealing with rich people who think I deserve $15 an hour. I’ve always had a fascination with boats, ever since my dad brought one home. My sister and I used to hide in it whenever we were in trouble, even though it was the first place dad would look. We’d play games on the deck, imagining we were far out at sea, being attacked by pirates or landing on a tiny island. So yes, I think I would like to be a boat engine mechanic. That sounds like a job I would like to do.

I don’t know anything about fixing boats, but I would be willing to learn. How hard can it be? Well, clearly it’s hard enough, otherwise, we wouldn’t need people to fix our boats for us, would we? How does one learn to fix boats, I wonder? I suppose I need to find a master. Once upon a time, if you wanted to learn a skill, you could humbly approach the master at his home, bow before his front door, and ask him to teach you. But I think it might be weird if I went to a mechanic at his house and asked him to teach me how to do outboard motor service. I suspect he would probably call the police.

Instead I will have to search job boards for openings, seeking an apprenticeship the modern way. Can you study to repair boats? That sounds quite appealing. Perhaps I will study a Bachelor of Boat Repair, then go on to complete a PhD, writing a thesis on why boats break. Then I will be able to tell people to call me doctor. And they will ask, “Oh, which hospital do you work at?” I will laugh and say, “No, I work at the marina. I’m the Boat Doctor.” Yes, I do think I would like to be a doctor of boats.